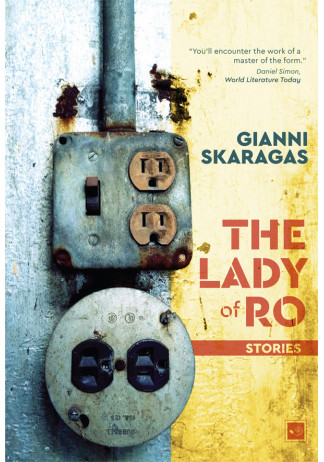 The Lady of Ro, stories

With pitch-perfect prose and compassion, the stories in The Lady of Ro describe the world in a way that reflects its fullest complications. Skaragas blends the personal and political to uncover an exquisite range of emotions that will open hearts and change minds. He writes with humor and insight about how we need to find our place in a world we don't fully comprehend, and what we owe each other.

“[...] I hated François Boucher. My mother bought tickets to the Art Institute of Chicago to show me an artwork of this French Rococo painter. We had driven 15 hours with a couple of fill-ups for gas and fast-food fixes to show me the Study of a Triton.
It was a preparatory drawing designed for a part of a larger painting in which the Triton bore an uncanny resemblance to my father. The expression, not mean but alarmed, was ambiguous.
“This artwork doesn’t prove that Dad is a demon.”
“Your father is the demon of the Sea.”
“Mom, you don’t really believe this madness, do you?”
“Can you explain how it is that he looks exactly like him?”
I studied the Triton’s features, the strong nose and thin upper lip. His face, in profile, was a kind of parody to my father’s good looks. It was my Dad with a shaggy mop of longish hair and crazed bushy eyebrows.
She heaved a sigh while an expression of pain contracted her forehead as if her greatest wish were for me to believe her. My left arched eyebrow that I had inherited from her came down and I nodded. I remembered when my mother was a young woman collecting blue bonesets and kissing me, her breath on the nape of my neck.
For a while I didn’t care that she was insane. Her eyes became dreamy and I thought this was what it felt like to have and not have a mother at the same time, to love her and hate her, to be a sea deity and not, a teenager and man. There was a mother-shaped trench in my life that I had not examined for years. Sometimes, it expanded to eradicate my memory and other times surrounded me like a hand closing around empty space.
I should have declined her offer, but then felt a rush of affection for this woman who pressed a folded twenty dollar bill into my palm and closed my fingers over it as if to emphasize her good intentions.
“I thought you were dead,” I said.
“I thought that, too, honey. My passion for life gets me in trouble sometimes.”'